r/MaliciousCompliance - Karen Wants to SUE ME! I Expose Her IMAGINARY LAWYER!

r/maliciouscompliance - OP works at a school when an entitled Karen calls in, demanding an outrageous amount of information from emails to receipts! She threatens to sue if it's not done IMMEDIATELY. But OP outsmarts her! Subscribe for future stories. 👱🏼‍♀️ One of my favorite Entitled people stories! [Karen PRETENDS to Be the Owner's WIFE! Tries to Fire Me!] 🤍🤍youtube.com/watch?v=dVWDnrflaZY Stories in this episode of malicious compliance: 0:00 - Intro 0:23 - Story 1 (u/Expensive_Theme7023) 3:25 - Story 2 (u/nevernotbethinking) 6:52 - Story 3 (u/brother_p) 9:37 - Story 4 (u/JJayHawk84) 11:51 - Story 5 (u/BrightRick) 15:22 - Story 6 (u/Berthole) ✉️Submit your stories to: Darkfluffofficial(at)Gmail.com 👍 Like this video if you want to see more! 😀 Wanna talk to me? Join my Discord Server: 🤍discord.gg/WTeqYGt #karenstories #funnykarenstories #entitledpeoplestories 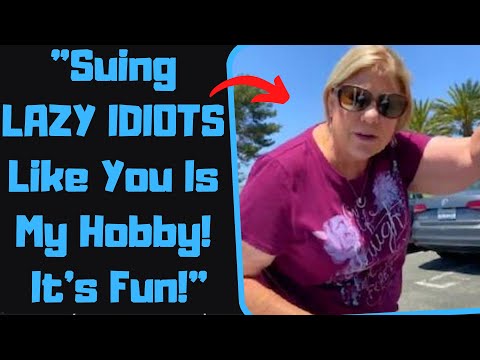 I used to work in Ladies Apparel at KMart. Women would repeatedly hit the bell to call me to let them into the dressing room, while FACING the dressing room. So they wouldn't see me coming. I would walk up directly behind them and say, CAN I HELP YOU? They would practically jump out of their skin. Very satisfying.

Story 2: This story is about 22-23 years old. My oldest sister used to work at a movie theatre when she was 18(40-41 now). According to her, the ticket booth had some really thick glass and it could sometimes be difficult for the customer to hear an employee in the booth. One time, she overheard one of her co-workers getting chewed out by a customer over ticket prices. Her co-worker handled it, sold the ticket, and thanked them with a "ef you very much!". Most of the customers didn't catch it. But, tempt karma enough times, and you'll get burned. Eventually, management caught onto it and fired her co-worker for "unacceptable behavior".

What planet are these Karen's from?😂 People can be so annoying

I have a similar issue where I keep getting offered kid’s menus and meals even though I’m in my 20s.

My 18th birthday was a fun laugh with the waitress.
My 23rd was especially fun when I ordered a cocktail after gently refusing the kids menu.

lol, the olive garden one.... Walmart tried playing that one with me. I had found a job that was paying me 2x what I was making at Walmart, which was minimum wage in the 1990s. 😂 oh no I can never work at a Walmart again? what ever shall I do?

For the second to last story I can relate. I am a freelance graphic designer and when you are dealing with a high-quality print document sourcing out to a print shop you have to take into consideration the time it takes to print the project so meeting deadlines is mandatory. And going back into the 80s before the Mac made everything easier, The production art work had to have the graphics and photos cut and pasted along with Letraset pressed type to create mechanicals used in the four color print process. And at the printers creating camera art for the printing plates was also a very painstaking process. The last thing OP needed was some pumped up favoritism hired ego driven megalomaniac wanna be expert shining a light on every tiny insignificant detail. Very costly lesson for the boss so maybe the next time some “friend“ suggests that he hire someone as a favor he’ll think twice.

I did something like Story #4 once. Was working as a bus boy for a restaurant (my 2nd job ever, I turned 18 while working at the place), and one of the managers (the head manager) had a problem with my appearance, specifically my long hair. I'm a guy, and I've almost always had long hair. Just a personal preference, and at the time it wasn't even that long, just a little past shoulder length. There was no company policy or requirement that it be short (plenty of the female waitresses had very long hair), and none of the other managers cared at all, it was just that she had some kind of issue with long-haired men, ESPECIALLY if they kept it in a pony tail. To avoid her being that bothered by it, I kept my hair slicked back and basically frozen in place with hairspray. I would still catch comments from her about how I needed a hair cut, but she mostly left it alone. But on New Years Eve (which I would have rather been spending with my girlfriend, but I had to work), I was in a rush that night and didn't have time to get my hair "ready". So I just pulled it back into a ponytail. It was an all-hands on deck night, and since all the other managers would be there, I didn't think it would be a problem and that I could mostly avoid her. Worked ok for a while, but when she caught sight of me, I got laid into about how disgusting I looked and that if I expected to keep working there I had better have my hair cut before my next shift. I was so pissed that I called my girlfriend to let her know I was coming over and left right in the middle of the New Years rush. The boss called me the next day asking what had happened, that I better be getting my hair cut and have a really good reason for leaving them a man short on New Years Eve, and I was being written up for it. I told her no, I wasn't getting it cut, and that her being such a bitch was the reason. Seemed to catch her off-guard since she paused for a second, and then said, "I assume that means you're not coming in tomorrow." "No, I'm not." I was honestly surprised at how that shut her up, I figured she would have went off on me for calling her a bitch.

What's crazy about the first is your boss is such a spineless turd that he actually wrote you up for this "eye contact" bullshit. Those stores deserved what they got in the end. Turned into parking lots or worse, I-stores.

Being asked to not return to the Olive Garden…hmm…for some people, it really is like being treated like family.

Man, that last story... The world needs an elite group of people whose only job is hanging out in places where crap like this is likely to occur, just so that when the idiot screams "Why did they get the better room instead of me!?" They can look him in the eyes and calmly say "Because you are an @$$f--- sir."

I get this all the time at the gun counter. I start off asking if their address is correct on their ID for the purposes of the background check form. With the problem ones it is often an honest "no" or "we just moved", to which I explain the other required documents I need to use for address verification. They then decide that they don't want to bother getting those and then say something like "Oh, well it IS correct." As if changing the answer means I have to go along with that. I've P-O'd quite a few by refusing service until they get the required documents or change their license. Fun fact: gun stores in the USA can refuse sale for any reason, at any time, and there is nothing that customer can do about it. Having a reason such as 'lying to employee to get what they want' just makes things a bit easier. If they throw a big fit about things, we'll take their ID as if we give in and then put their name into our black list which means the computer will not allow sale to them in any of our many stores. This can only be reversed by someone at corporate, and their policy is to not do so.

Story 1: Wow. I'm really glad I never got in trouble for not making eye contact...considering that I have autism and almost never make eye contact with anyone. What a ridiculous thing to complain about as a customer.

Why is it that everyone writing these stories tries to tell us the name of the store without actually mentioning the name of the store? I mean, what's the point of beating around the bush and being oblique? If WE know what they're referring to, so would the management of the store. I think it's just a silly practice.

Story 5 - Math is off. Why is the $8,000 only inflated 2.5 times, while the $50,000 was inflated 4 times. This did happen in the same year....right? Other than that, love all these stories, and I love this channel and the way ol' Fluff tells these tales. I think this channel is slowly turning into my gf's favorite channel, also!

At my office if someone says their lawyer is involved, we stop work and tell them everything will now have to be submitted via the law office from now on. 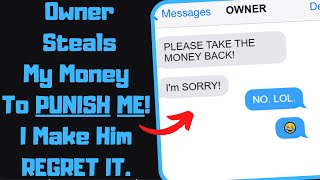 r/MaliciousCompliance - Smug Boss STEALS $9 From Me For LEAVING EARLY! Gets RUINED. 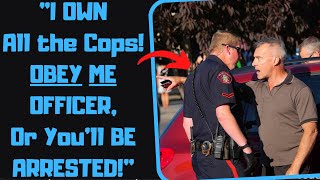 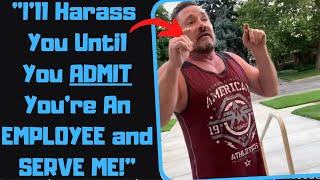 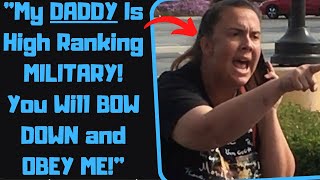 r/IDontWorkHereLady - Bratty Karen Commands CUSTOMER to Obey Her! Her Dad Is Military. 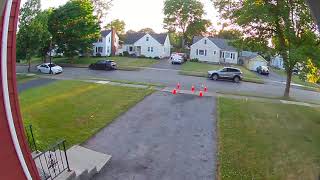 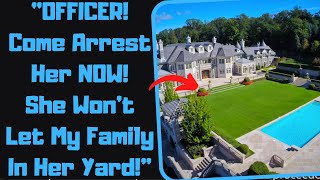 r/EntitledPeople - Petty Karen Calls 911 When I Kick her Off MY PROPERTY! 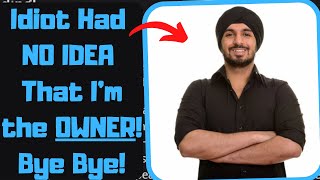 r/Entitledpeople - Racist EMPLOYEE Bans Me from MY OWN RESTAURANT! 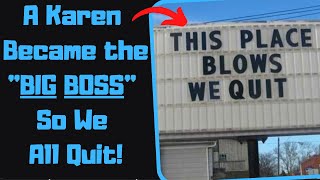 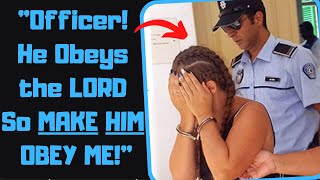 r/IDontWorkHereLady - Insane Karen Attacks a PRIEST For Disobeying Her! It Gets WORSE! 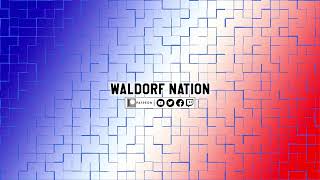 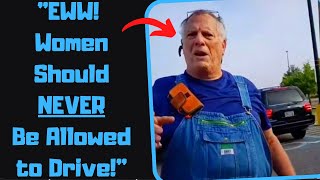 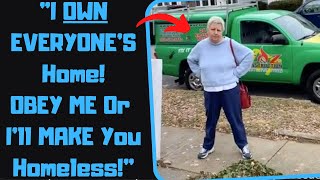 r/EntitledPeople - New Karen Neighbor Tries to POLICE My Home! Says She OWNS It! 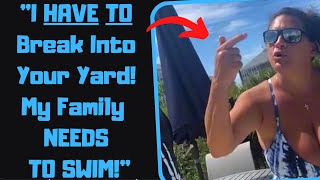 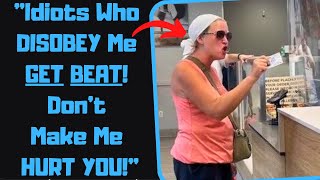 r/IDontWorkHereLady - Psycho Karen Attacks CUSTOMER For Not Serving Her! LIES TO COPS! 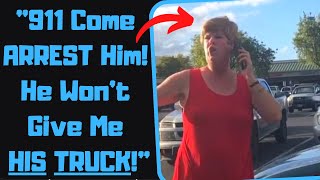 r/EntitledPeople - Spoiled Karen Calls Cops When I Won't Give Her MY TRUCK! SAYS IT'S HERS! 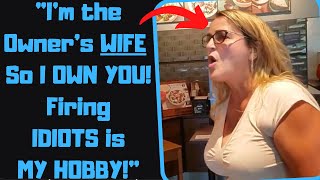 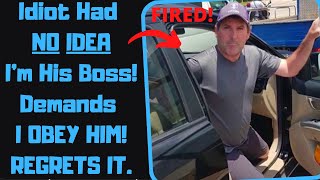 r/IDOWorkHereLady - Smug New Employee Says I'm NOBODY and Harasses Me! I'm HIS BOSS.